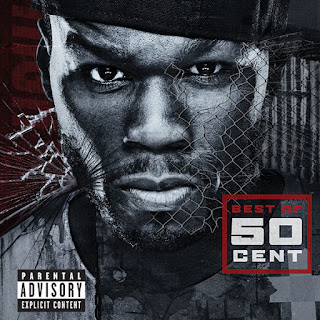 Universal Music Group is collecting the hits of hip-hop artist 50 Cent for his first collection titled "Best Of 50 Cent." It will be released on March 31st and features 18 of 50 Cent's most well-known jams. With his last studio album arriving almost 3 years ago, this new compilation will fill in the gap until his new release.

The album begins with his most well-known tune, "In Da Club," which topped seven singles charts world wide. The album continues with another chart topper, "21 Questions," which features Nate Dogg helping out. 50 Cent continues that winning streak with "Candy Shop" and Olivia lends a hand on this top-selling single along with "Best Friend." He only cracked the top 5 on the singles chart one last time with the Justin Timberlake collaboration "Ayo Technology." This new release wraps up with a couple of 50 Cent's non-album singles, "Get Up" and "I Get It In," before closing with the Ne-Yo collaboration "Baby By Me" and 50 Cent's first single "How To Rob," from the "In Too Deep Motion Picture Soundtrack."
50 Cent (Curtis Jackson) has kept busy lately filming three movies that will be arriving in the next couple years along with guest episodes on television. It is rumored that 50 Cent also has an album recorded and ready for release, but no official word has been given on this yet. To find out more about the "Best of 50 Cent," please visit respecttheclassics.com.
Posted by JP's Music Blog