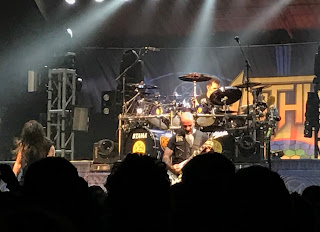 The Oakdale Theatre in Wallingford was ground zero for the heavy metal community on Tuesday night. Four bands, including the powerful Killswitch Engage and the legendary Anthrax, descended upon The Dome to deliver over four hours of energetic, head-banging metal.

The night began with a short 20-minute set from local Connecticut vocalist Jamey Jasta. He is best known in the hardcore, heavy metal community as the lead singer of the band Hatebreed, but Jasta brought his solo band to this “hometown” gig. Following Jasta was the hardcore progressive metal band The Devil Wears Prada. Their 40-minute set gave the audience a sampling of their great musicianship and dual vocals as they gave new fans a taste of their brand of metal music.

Anthrax were the elder statesmen of the evening, celebrating over 35 years as a thrash metal band and their fan base ranged in age from 10 years old to 60 years old. Their 75-minute set centered on their most famous album, “Among The Living” and their current release “For All Kings.” The audience sang every word to their more well-known tunes like “Among The Living” and “I Am The Law,” while the intense, extra-fast delivery of “Caught In A Mosh” opened up the pit for fans to slam to. Guitarist Scott Ian begged the question, “Do you like thrash metal?” To which a huge roar came from the audience. Their new songs “Evil Twin” and “Blood Eagle Wings” carried a heavier vibe in this live setting and fit perfectly alongside classics like “Madhouse” and “Antisocial.” Anthrax closed their set with the extended jam of “Indians,” which included a “wardance” as the mosh pit grew larger in the center of the floor. 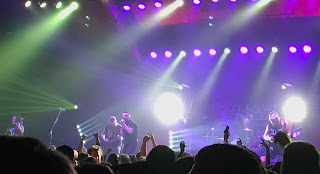 Headliners, Killswitch Engage had the audience eating out of the palm of their hand as songs like “My Last Serenade” and “Hate By Design” put everyone’s adrenaline into overdrive. The mosh pits excelled and the crowd surfing intensified during the hard hitting songs, “Vide Infra” and “This Fire Burns.” The chugging guitars of “The End Of Heartache” and the screams of “Rose Of Sharyn” turned the crowd on its side as the energy shot through the roof. After almost four-and-a-half hours of hard hitting, heavy metal music, Killswitch Engage finished the evening with their popular cover of Dio’s “Holy Diver” and their equally popular original “In Due Time.” As this tour makes its way across the U.S., it will leave a path of heavy metal fans with a renewed love for the genre as all in attendance threw up the devil horns in salute.
Posted by JP's Music Blog