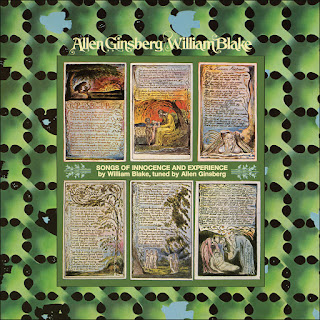 Award-winning poet Allen Ginsberg was a leading figure of the "Beat Generation" of the 1950's as his unconventional work touched upon everything from religion to politics to sexual freedom. In 1970, Allen Ginsberg released an album of poetry by William Blake sung by Ginsberg, himself. For years the album has been out of print on vinyl and was never released on CD until its June 23rd premier on Omnivore Recordings.

The 2CD set is broken up into three parts, "Songs Of Innocence," "Songs Of Experience" and "Blake Songs." The new release also includes a new essay by producer Pat Thomas, who was able to track down the original musicians from the sessions to interview for the new liner notes. Ginsberg's vocals will take time to get used to as they struggle at times to carry tune, but the lyrics are what make this release an important piece of poetic history. The 2 sets of songs for "Songs Of Innocence" and "Songs Of Experience" are featured on the first disc as the music carries a folk/baroque feel as Ginsberg's vocals try to follow suit as if he was preaching the work of English Romantic William Blake.

The second disc consists of the "Blake Songs" as Ginsberg recites the work of Blake while accompanied by avant-garde cellist Arthur Russell. The tone is more somber than the first disc as four of the eleven songs have never been released, including the slightly more upbeat feel of "Spring" and the acoustic folk story of a "Nurses Song." The second disc finishes with three Tibetan mantras that feature a Buddhist choir as Ginsberg brings together the Eastern cultures into the Western mind in order to create a true worldly experience. To find out more about this new release of "The Complete Songs of Innocence And Experience," please visit omnivorerecordings.com.
Posted by JP's Music Blog