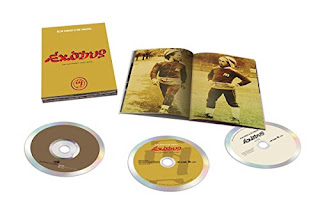 Bob Marley & The Wailers' iconic 1977 album "Exodus" is celebrating its 40th anniversary with a new 3CD or 4 LP super deluxe edition. The CD set was released on June 2nd through Universal Music and was led by Bob's son, Ziggy, who took newly discovered original sessions with never-before-heard vocals and created new versions of the songs from this classic album. The 4 LP super deluxe edition will be available on June 30th and also contains two-7" singles containing the songs "Waiting In Vain" b/w "Roots" and "Smile Jamaica (Part 1)" b/w "Smile Jamaica (Part Two)."

The new package includes original album, remastered on the first disc, which was also remastered back in 2007 for the album's 30th anniversary. The second disc contains the new version of the album, created from the newly uncovered takes with different vocals. Right from the opening track, "Exodus," you are introduced to what sounds like a modernized version of the song. The rhythm is quicker and the sound is slightly louder overall than the original version of the song. It is refreshing to hear different versions of the music that we have all come to fall in love with over the last 40 years, and Ziggy Marley did an exceptional job keeping the truth in his father's vocals. The music at times reaches the brink of going over the top, but Ziggy pulls the reigns back and keeps in mind what his father would have wanted these songs to sound like if he released them in 2017. Songs like "One Love/People Get Ready," "Waiting In Vain" and "Three Little Birds" showcase a different dimension to the song's lyrics as the are presented here differently.

The third disc features Bob Marley & The Wailers live at the Rainbow Theatre in June 1977 during the "Exodus" tour. Only one song, "The Heathen" has be previously released from this concert as the other seven songs included have not be previously released before. Bob sounds as if he has a renewed love for life and his music since the assassination attempt on his life early that year. The band is prepared to follow Bob anywhere, as he brings the audience on a journey with the seven-plus minute "Guitiness" and the nearly 12-minute closer "Exodus." To find out more about this new version of Bob Marley & The Wailers album "Exodus 40 - The Movement Continues," please visit bobmarley.com.
Posted by JP's Music Blog