Concert Review: Train Arrives At Mohegan Sun To "Play That Song" On Tour 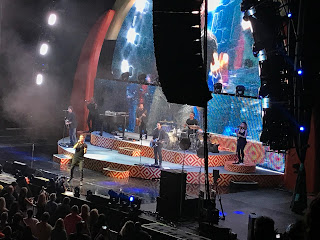 Train pulled into the Mohegan Sun arena last Tuesday night on their latest cross country trek of the "Play That Song" tour. This time they brought along some new friends, British singer/songwriter Natasha Bedingfield and Maryland alternative rockers O.A.R. to help get the party started. Even though the concert was during the week, near the last days of school, the arena was packed with fans of all ages.
Singer Natasha Bedingfield opened the evening with a short 30 minute set. She got the early audience members singing and dancing along to her hits, "Pocket Full Of Sunshine" and "Unwritten." As the arena began to fill up, fellow east coast band O.A.R. took the stage to a roaring applause. They certainly got the energy flowing with their 50 minute set, which was highlighted by a trumpet/saxophone dual and the beautiful ballad "Peace," during which cell phones lit up the arena.
After a brief intermission, it was time for Train to arrive. While most bands save the confetti and streamers for the end of the show, Train kicked off with it, as they began their set with a new song, "Drink Up." The band Train may look different since the last time they played the arena two years ago, as lead singer Pat Monahan is the only original member of the band. He does surround himself with some very talented musicians and singers, as they turn recent hits like "50 Ways To Say Goodbye" and "Save Me, San Francisco" into party anthems.
Pat and the band invited Natasha Bedingfield to the stage for a sweet and soulful duet of "Bruises," before singing the opening verse of "Play That Song." Without the response he expected, Pat Monahan decided that the audience was not ready yet for that song and decided to dive back to the band's early days with "Meet Virginia." After the spiritual delivery of "You Better Believe," Train invited members of O.A.R. to perform the fun, up-tempo cover of Paul Simon's "You Can Call Me Al" as the energy from that song, continued right through to the set closers "Hey, Soul Sister" and finally "Play That Song" from the band's most recent album.
The current band members of Train got to showcase their talents during opening song of the encore. Their version of Queen's "Under Pressure" allowed each member to stand out on this identical cover of this classic rock tune. The night closed with Train's biggest hit of the band's early years as "Drops Of Jupiter" display how long the band has come in almost 20 years of providing positively fun music.
Train Setlist: Drink Up, 50 Ways To Say Goodbye, If It's Love, Angel In Blue Jeans, Get To Me, Save Me San Francisco, Calling All Angels, Bruises (with Natasha Bedingfield), Meet Virginia, Drive By, Marry Me, You Better Believe, You Can Call Me Al (with O.A.R.), Working Girl, Medley: Mermaid/Shape Of You/Cheap Thrills/Treat You Better/Lost And Found, Hey, Soul Sister, Play That Song
Encore: Under Pressure, Drops Of Jupiter
Posted by JP's Music Blog