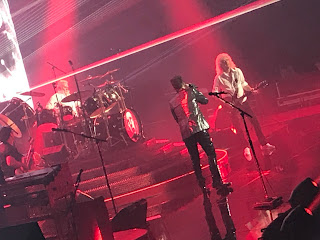 One of rock music's most prestigious and legendary bands made a return visit Sunday night to the Mohegan Sun arena. The band is Queen and two of its original members continue to add to the band's ever growing legacy. Guitarist Brian May and drummer Roger Taylor have assembled an amazing cast of band members, but the iconic spot of front man, who was lead by the incomparable Freddie Mercury, was filled by iconic pop singer Adam Lambert.
Since Queen decided to continue (after the death of Freddie Mercury) over a decade ago, they have had only a couple of different front men fill that roll. First was Paul Rodgers (Bad Company), which became a success of combining the music of the two bands, but the members of Queen wanted to showcase the music of their extensive catalog exclusively. So after a couple of years, Adam Lambert found his way into the hearts of Queen fans after his performances of "The Show Must Go On" and "We Are The Champions."
It has been three years since Queen made an appearance in Connecticut as fans were eager to relive all those classic songs that became soundtracks to our lives. After 30 minutes of ambient music oozed from the speakers, a ten-foot tall video screen which stood in front of the stage was lifted to welcome Queen + Adam Lambert to the stage, pounding out the rhythm of "We Will Rock You."
Adam, Brian and Roger were all business during the band's heavier rock tracks "Hammer To Fall" and "Stone Cold Crazy," before getting all the ladies up on their feet dancing to "Fat Bottom Girls." Adam Lambert arose from center stage on a giant robotic head (similar to Queen's "News Of The World" album) in the first of over a half a dozen outfit changes to perform the classic "Killer Queen" and his new solo single "Two Fux."
Guitarist/singer Brian May would utilize the catwalk (shaped like the neck of a guitar) to perform a solo, acoustic version of the Queen ballad "Love Of My Life." The song would end with an appearance of Freddie Mercury on the giant video screen singing harmony with May. Adam and drummer Roger Taylor would soon re-join May at the end of the catwalk to a mini-stage setup to perform crowd favorites "Somebody To Love" and "Crazy Little Thing Called Love." After a drum battle between Taylor and percussionist Tyler Warren, Adam Lambert and Roger Taylor would duet on "Under Pressure" as a tribute to their dear friend David Bowie.
The stage would be lit up like a Christmas tree, courtesy of a disco ball, for "I Want To Break Free," before lasers and Lambert's vocals delivered a memorable version of "Who Wants To Live Forever." Brian May was elevated above the stage to perform his space-like guitar solo, leading into the keyboard induced "Radio Ga Ga" and the set closer "Bohemian Rhapsody."
Queen + Adam Lambert would return to the stage for a thunderous encore, beginning with the stomping rhythm of "We Will Rock You" and the inspirational "We Are The Champions." As confetti shot out over the audience during the song's final notes, all of the members took center stage for a final bow as "God Save The Queen" played throughout the arena. With the perfect recipe in place to continue the legacy of the band, Queen + Adam Lambert seem like a match made in rock 'n' roll heaven.
Setlist: Hammer To Fall, Stone Cold Crazy, Another One Bites The Dust, Fat Bottom Girls, Killer Queen, Two Fux, Don't Stop Me Now, Bicycle Race/I'm In Love With My Car, Get Down Make Love, I Want It All, Love Of My Life, Somebody To Love, Crazy Little Thing Called Love, Under Pressure, I Want To Break Free, Who Wants To Live Forever, Radio Ga Ga, Bohemian Rhapsody
Encore: We Will Rock You, We Are The Champions, God Save The Queen
Posted by JP's Music Blog

Great review!!! Thanks for that. Looking forward to seeing them in Melbourne next year.

Excellent review can not wait for my turn .

i have 6 months to wait for my Oz shows, i tell you I am beside myself with excitement to see this fantastic show

Exzellent review,I had to wait until November to see them live again❤

Great review thank you. It reminds me of the magic of last summer when I saw Adam and Queen. The best concert in my life. Adam has the most flexible and wide range of voice I've ever heard. He can basically do every genre justice and authentically - rock, pop, blues, country / !!! /, musical theater, opera. The most amazing voice in the music business today.

Don't you love the fun they have on stage and how in synch they all are both musically and personally? It's hard to miss the joy that rolls off the stage. Such great musicians and wonderful human beings. Adam's voice is from another dimension and Brian and Roger continue to stun with their instrumental skills. I saw a few stops on their last tour but they've outdone themselves this time. My shows are coming up and I can't wait. Thanks for the great review.

Queen + Adam Lambert is an amazing show everyone must see !!

Everyone should see this, it is not to be missed! Great review!

I enjoyed reading your post thanks for sharing it