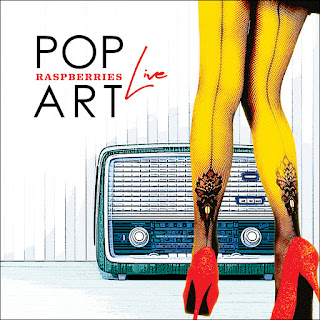 American band, The Raspberries had a run of success in the early 70's with singles like "Go All The Way" and "I Wanna Be With You." They drew their influences from the British invasion of the sixties and structured their songs after the hits of The Beatles and The Hollies. After breaking-up in 1975, their influence expanded into the music of Bruce Springsteen, Tom Petty and even Kiss. The Raspberries' singer/songwriter Eric Carmen had a successful solo career in the 80's and the remaining members of the band (minus Carmen) reunited in 1999 to record a new album titled "Raspberries Refreshed." A full on band reunion would not happen until 2004 when a new House Of Blues opened in Cleveland. The show was recorded for VH1 Classic and XM Satellite Radio, but not officially released until August 18th when a new 2CD set will become available from Omnivore Recordings.

The new two-disc, 28-song set mixes many of the band's favorites like "I Wanna Be With You," "Don't Want To Say Goodbye" and "Overnight Sensation (Hit Record)" with covers from The Who and The Beatles. The music still sounds timeless as the band injects some electric energy into songs like "Party's Over" and "Tonight." The years just melt away as their signature sound comes shining through on songs like "Last Dance" and "When You Were With Me." The Raspberries still know how to bring out their best in this live setting. The show closes with the guitar-driven "I'm A Rocker" and their classic hit "Go All The Way." To find out more about The Raspberries and their latest new live album "Pop Art Live," please visit omnivorerecordings.com.