CD Review: Autograph Want You To "Get Off Your Ass" & Listen To Their New Album 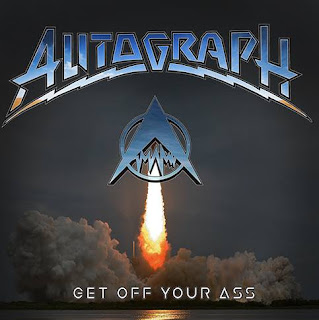 Los Angeles hard rock band, Autograph have returned with a brand new studio album titled "Get Off Your Ass." It is the band's debut release on the EMP label and is also the first release with the band's current touring line-up, which still includes founding members Steve Lynch and Randy Rand. Autograph conquered the airwaves over 3 decades ago with "Turn Up The Radio" and they also bring that hit back on this new album with an incredible live version of the song.
The new 10-track release begins with the high-powered energy of the title song "Get Off Your Ass," which could easily be the band's new arena-rocking hit. The band continues to roll-out that classic Autograph sound with "Every Generation" and "You Are Us We Are You" as Lynch's guitar riffs continue to rock your speakers. The band sounds renewed with "I Lost My Mind In America" and "All Emotions" as their brand of rock music has a timeless quality that should continue to make Autograph one of the top classic rock bands of all time that are still making quality hard rock music. Autograph have a show line-up at the Mohegan Sun arena on October 6th to celebrate the release of the band's new album "Get Off Your Ass." For more information on the band, please visit autographband.com.