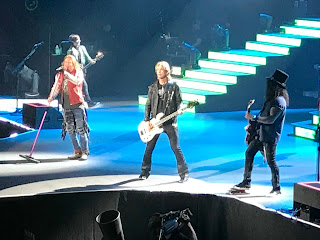 When a band like Guns 'n' Roses come to town, it becomes an epic rock event, especially when the band's core three members are touring together for the first time in over 20 years. The tour is called "Not In This Lifetime," which was quoted by Axl Rose years ago when asked if he would ever play again with original guitarist Slash. Now the two have put their differences aside and joined forces along with original Guns 'n' Roses bassist Duff McKagen to invoke on one of the biggest world tours of the year.

At just before 8pm, a short, animated movie showing all of Guns 'n' Roses conquests in the last two years got the crowd riled up. Bassist Duff McKagen hit the first riffs of "It's So Easy" and the three-plus hour marathon was underway. Axl's voice was in fine form throughout the evening as the band mixed in songs from all five of their original albums. Fan favorites like "Welcome To The Jungle" and "Live And Let Die" supported the weight of the lesser known songs like "Better" and "This I Love." The whole band collaborated on an epic version of "Rocket Queen" as the audience sang along to the song's chorus. Lead guitarist, Slash was simply amazing during the solos of "Double Talkin' Jive" and "Estranged," while Duff took over the lead vocals on their cover of The Damned's "New Rose."

Axl would pull an audible and perform the song "Prostitute," (from their 2008 album "Chinese Democracy") for the first time on this tour. Following the long, momentous feel of "Coma," it was now Slash's turn in the spotlight. His emotional guitar solo drew all eyes on him as his performance of the "Speak Softly Love (Love Theme From The Godfather)" lead right into the crowd pleaser "Sweet Child O' Mine."

To say that Guns 'n' Roses is one of the best cover bands, is an understatement, but the second half of the night featured covers of almost half of night's final fourteen songs. The excitement was raised to the next level as a punk-like version of "My Michelle" followed the mellow acoustics of the Glen Campbell's "Wichita Lineman." Guitarists Richard Fortus and Slash traded verses on Pink Floyd's "Wish You Were Here" as Axl settled into his seat at the piano for "November Rain." The main set closed with a rocking version of "Nightrain," that only left the audience only wanting more.

Guns 'n' Roses would build the tempo back up during the encore, beginning with "Madagascar" and "Patience." They dedicated their version of AC/DC's "Whole Lotta Rosie" to Angus Young's brother, George Young, who recently passed away. The night would finish over 3 1/2 hours later was a strong, quick version of The Who's "The Seeker" and the final energy blast of "Paradise City." As fireworks and confetti rained down throughout the arena, Guns 'n' Roses proved once again why that are one of the greatest rock 'n' roll bands of all time.