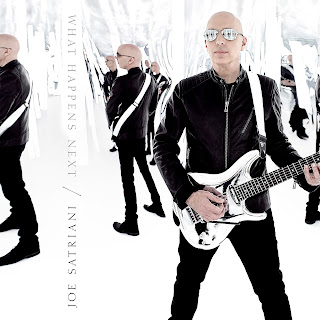 Guitarist extraordinaire, Joe Satriani is diving right into 2018 with a new studio album and a new G3 tour, which includes John Petrucci (Dream Theater) and Phil Collen (Def Leppard). His new album titled "What Happens Next" shows that at the ripe young age of 61, he shows no signs of slowing down. The new 12-track release kicks off with the high-powered "Energy" as he gets his hard rock groove going. His guitar playing gets a little more funky on the fuzziness of "Catbot," before rising up to the next level of playing with "Thunder High On The Mountain." He slows the tempo down for the bluesy "Smooth Soul," then kicks things back into high gear with the swift-moving energy of "Headrush." He finishes up his new album with the nearly eight-minute jam "Super Funky Badass" as he rips through some electrifying guitar riffs, before the more quiet, classical-like piece "Forever And Ever."

The new G3 tour kicks off on January 11th in Seattle running for two months worth of shows in the U.S., before continuing the tour over in Europe. For a complete list of dates and to find out more about Joe Satriani's new album "What Happens Next," please visit  satriani.com.
Posted by JP's Music Blog