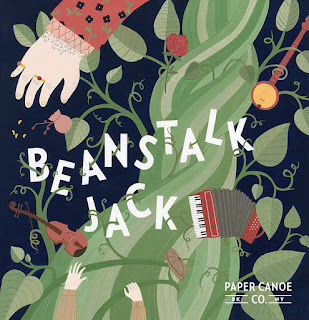 In early 2018, New York's Paper Canoe Company will release the musical retelling of "Jack And The Beanstalk." The new release titled "Beanstalk Jack," features Tami Stronach ("The Neverending Story") and embraces the folk music of the early '60s and '70s.

The new 16-song release begins with the groundwork of the title-song "Beanstalk Jack" as you can hear influences of groups like The Band and The Beatles. The simplicity of "Daydream" and the country vibes of "Let Me Be" will have you and your children glued to the music as it finds its way into your heart. The Paper Canoe Company showcase their wonderful harmonies during "Bestest Bargain" as if it was sung by Simon & Garfunkel. Tami Stronach finally makes her presence known during the folk ballad "Look At Us Now," before the fun, up-tempo sing-along of "Upseedoodledo." The Paper Canoe Company plug in to rock out with "Lonely Boy," before wrapping up their new release with Tom Waits-inspired "Fee Fi Fo Fum" and the swift, acoustic folk strumming of "Get On Down The Beanstalk." To find out more about the Paper Canoe Company and their latest output "Beanstalk Jack," please visit beanstalkjack.com.