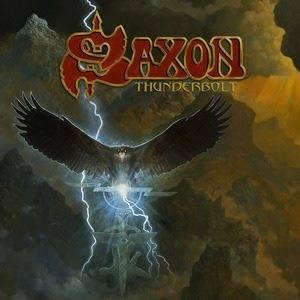 British heavy metal band Saxon will be releasing their 22nd studio album titled "Thunderbolt" on February 2nd through Militia Guard (Silver Lining Music label). The album will be released in a number of different formats, including CD, 180-gram colored vinyl, cassette, digital and a special edition box set. Following the album's release, Saxon will be heading out on a headlining tour of Europe, before joining fellow heavy metal giants Judas Priest for their U.S. tour this spring.

The new 11-song release begins with the 93-second instrumental "Olympus Rising" as the build-up of music invites you in to the band's new album. After 40 years, Saxon can still rock with the best of them, as displayed in the high-powered energy of "Thunderbolt" and "The Secret Of Flight" as singer Bill Byford sounds as good as ever. Their classic metal sound is felt in their tribute to "Nosferatu (The Vampires Waltz)" and in the dark tones of "Predator," while "Sons Of Odin" is an epic sounding piece that deserves to live in the musical history of Saxon. The band finish up their new album with the high-energy attack of "Sniper" and the classic rock feel of "Roadie's Song." For a complete list of tour dates and to find out more about Saxon and their latest studio release "Thunderbolt," please visit saxon747.com. 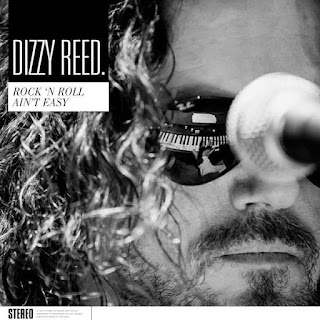 Long-time Guns 'N' Roses keyboardist Dizzy Reed is preparing to release his debut solo album "Rock 'n Roll Ain't Easy" on February 16th. Reed takes the lead on vocals for this album, with a backing band that includes members of W.A.S.P., Quiet Riot, Thin Lizzy, No Doubt and many more, including fellow "Gunner" Richard Fortus. The album starts off with the lead-single, "This Don't Look Like Vegas" as Reed's vocals carry that classic, seventies hard rock vibe as the music just pulsates with energy. The music gets a little grittier on "Mother Theresa," before Reed showcases his skills on the keys for the steady climb of "Fragile Water."  The music of "Mystery In Exile" has that classic post-punk vibe, while "Understanding" carries an iconic G'N'R shuffle rhythm. Dizzy Reed wraps up his solo debut album with the dirty blues of "Forgotten Cases" and the soulful emotions of "Rock 'n Roll Ain't Easy."

Dizzy Reed has some dates left on his U.S. tour and has an album launch planned for February 18th in Sydney, Australia. To find out more about Dizzy Reed and his new solo LP "Rock 'n Roll Ain't Easy," please visit his Facebook page at facebook.com/DizzyFnReed.