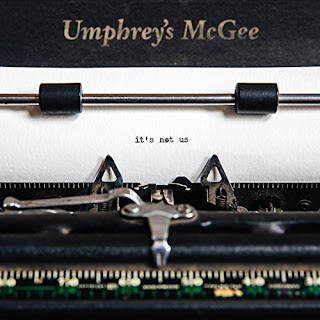 Indiana rock band Umphrey's McGee are starting the new year off right with a brand new studio album (their 11th) and of course a U.S. tour to follow. If you know the band, then you are aware that they perform almost 200 shows a year. They earn their fans on the road, but their latest release "it's not us" shows another side of the band as they deliver one the most exciting studio albums of the band's 16 year career.

The new 11-song release begins with the six-minute hard rock assault of "Dark Brush" as you can feel the band's progressive/jamband side light up your speakers. They deliver the alternative rock appeal of "The Silent Type," then get funky with the rhythm of "Looks." Umphrey's McGee break out the blues for the "Whistle Kids," before delivering the back-to-back epic rock pieces "Maybe Someday" and "Remind Me." They finish up their new album with the acoustic folk ballad "You & You Alone" and the built-up buzz of "Piranhas." Umphrey's McGee are currently on tour through March. For a complete list of shows and to find out more about their new album "it's not us," please visit umphreys.com.