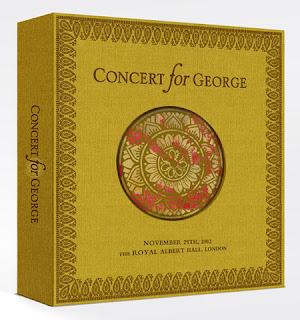 In honor of what would have been George Harrison's 75th birthday, a new 10-disc box set of the "Concert For George" will be released on February 23 through Concord Music. The 10-disc deluxe box set will be limited to only 1,000 pieces, which include a newly remastered edition of the concert on four 180-gram vinyl LPs, 2 CDs, 2 DVDs and 2 Blu-ray discs. Also included in the box is an amazing 60-page hard-bound book with pictures from the show and a piece of the original hand-painted tapestry that appeared on stage as the backdrop.

The original DVD release has been certified 8-times platinum by the RIAA since its initial release in 2003. The new 2-disc DVD or Blu-ray set includes the entire filmed concert on the first disc and the theatrical version of the concert with interviews and behind-the-scenes footage on the second disc.

The new 2CD set includes the entire concert, except for the opening performances from the Monty Python troupe, which included Tom Hanks, and the song "Horse To Water," one of Harrison's final recordings. Both of those recordings are featured on the vinyl set and the digital versions, which also includes the entire show for the first time on vinyl, plus a mandala design etched into one of the sides.

The newly remastered sound is amazing for a live show, as all of Harrison's friends have gathered together to pay homage to this amazing musician who left us way too soon. These once-in-a-lifetime performances are captured beautifully as you enjoy Eric Clapton teaming up with Paul McCartney on The Beatles' classic "While My Guitar Gently Weeps," as well as Tom Petty, Jeff Lynne and George's son, Dhani Harrison recreating the Traveling Wiburys' "Handle With Care." The other thing you realize, listening (or watching) this concert is that in the time since this concert was recorded, we also lost the legendary Tom Petty, Billy Preston and Ravi Shankar, who were all key figures in George Harrison's life. For more information on the newly release "Concert For George" set, please visit georgeharrison.com.
Posted by JP's Music Blog