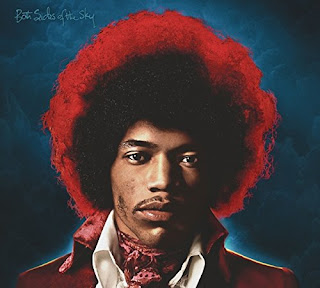 Since the passing of the legendary Jimi Hendrix, compilations of his work has plastered the marketplace. Each one trying to re-create what would have been his next move. Hundreds of different studio outtakes have existed and without the man, himself here to guide us, producers have done their best to put the pieces of the puzzle together in order to imagine what would have came next.

The latest attempt titled "Both Sides Of The Sky," completes a trilogy of releases ("Valleys Of Neptune" and "People, Hell And Angels") that have pretty much took the best of the remaining studio songs that Jimi Hendrix recorded between 1968 to 1970. This new release is one of the closest that the Experience Hendrix/Sony Legacy label have come to putting together an attempt as to what Jimi Hendrix may have released on his next album.

Many of the songs on "Both Sides Of The Sky" are soaked in the blues, even beginning the new release with the Muddy Waters' classic "Mannish Boy." Hendrix's 1970 live album "Band Of Gypsys" laid the groundwork to many of the songs that appear on this release. Studio versions of "Stepping Stone," "Lover Man" and "Power Of Soul" sound as complete as they would ever get, as drummer Buddy Miles and bassist Billy Cox continued their work after those legendary live shows. The real nice surprises are the previously unreleased recordings of Jimi Hendrix as a sideman to great Johnny Winter ("Things I Used To Do"), Stephen Stills ("$20 Fine," "Woodstock") and Lonnie Youngblood ("Georgia Blues").

The music certainly captures the era and showcases Hendrix's love for experimenting in the studio, as a couple of the instrumental pieces on this release ("Sweet Angel" and "Cherokee Mist") feature Hendrix trying his hand at playing the sitar or the vibrophone. One of the later recordings on this release is "Send My Love To Linda," which gives a guiding sound as to the direction Hendrix may have been planning on for his next studio album. We may never know, but on March 9th, you will have your own chance to make your decision on this release when "Both Sides Of The Sky" is released on CD, vinyl and digital formats. To find out more about the great, exciting new release, please visit jimihendrix.com.