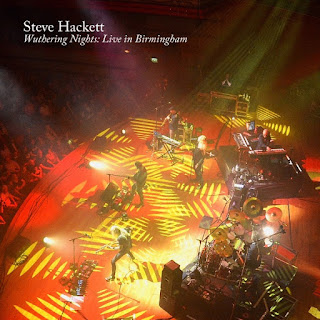 Former Genesis guitarist Steve Hackett embarked on a worldwide tour last year to celebrate the release of his new studio album "The Night Siren" and the 40th anniversary of the Genesis album "Wind & Wuthering." He captured the essence of the tour with the newly released live album "Wuthering Night: Live In Birmingham" on CD, DVD and Blu-ray.

The new 2CD set features the entire 19-song show, beginning with "Every Day" from Hackett's third solo album "Spectral Mornings," followed by the exciting instrumental "El Nino" from his latest release. The band collaborates on the seven-minute instrumental "The Steppes," as the first half of the show focuses on Steve Hackett's solo material. The second half of the show is what long-time Genesis fans will enjoy as Hackett and his band perform nearly spot-on renditions of the complex tales from the "Wind & Wuthering" album. The epic pieces of "One For The Vine" and other Genesis favorites like "Firth Of Fifth" and "The Musical Box" showcase the amazingly talented band that Steve Hackett assembled for this special tour.

The entire show was also captured in high-definition and is available on DVD or Blu-ray as part of the 2 CD set. Included with the show is a "behind the scenes" look into what went on the day of the show in Birmingham, as well as three music videos of songs from his new album, "The Night Siren." To find out more about Steve Hackett and his latest release "Wuthering Night: Live In Birmingham," please visit hackettsongs.com.