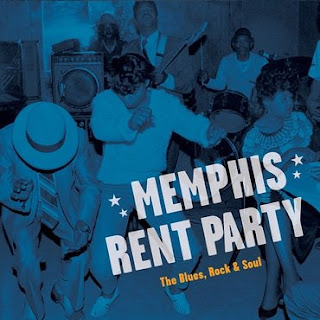 Grammy and Emmy winning writer and filmmaker, Robert Gordon wrote a new book, "Memphis Rent Party" about the music of Memphis. Gordon discusses everything from the early deep blues, to the birth of rock 'n' roll, to the soul of the Stax label. The book will be published by Bloomsbury on March 6th. As an accompaniment to the book, is the soundtrack of the same name that features many musical artists that are discussed in the book.

The new 12-song soundtrack will be released on March 9th through Fat Possum Records and kicks off with the outlaw Jerry McGill delivering the raw, acoustic blues of Guy Clark's "Desperados Waiting For A Train." Luther Dickinson and Sharde Thomas duet on the swampy, slide-guitar stomp of "Chevrolet" and then the soundtrack delivers the first of two recordings that Gordon made while on location, researching for his book. Robert Gordon recorded the late, great Junior Kimbrough performing, "All Night Long" live, in his living room with friends and neighbors in attendance. The great Jerry Lee Lewis performs a rocking version of "Harbor Lights" and The Fieldstones deliver the deep blues of "Little Bluebird," while performing live at Memphis' local Green Lounge. The soundtrack finishes with the boogie-woogie piano jazz of "Same Thing On My Mind" and Jim Dickinson tackling the six-minute blues soaked guitar-fueled "I'd Love To Be A Hippie."