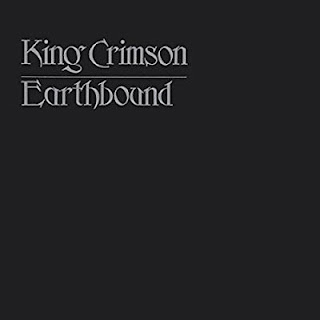 Progressive rock pioneers King Crimson have continued their 40th anniversary celebration (which began in 2009) with the latest re-issue in their extensive catalog. The band's first live album "Earthbound" was originally released in 1972 and was deemed an "official bootleg" due to its poor sound and rough recording. It also features some of the only live recordings from that group, which featured Robert Fripp, Boz Burrell, Mel Collins and Ian Wallace. The original album only featured five tracks, bookended by the giant progressive rock pieces, "21st Century Schizoid Man" and "Groon." The other live songs ("Peoria," "The Sailor's Tale" and "Earthbound") featured a load of scat singing as each member of the band seemed to try to outdo the other, knowing they were parting ways after this tour concluded.

In honor of the band's 40th anniversary re-issue campaign, "Earthbound" was remastered and included an extra three songs ("Pictures Of A City," "Formentera Lady" and "Cirkus") on the CD. Also included with this re-issue is the crown-jewel DVD which includes the original "Earthbound" album, remastered with an additional four bonus tracks added on to the new eight-song CD version. Not only do you get the best sounding version of the "Earthbound" album to exist, also included on this DVD is a new stereo mix and 5.1 digital surround sound mix of the "Summit Studios" recordings, which is worth the price along of the new release. The DVD also includes the eleven parts of the "Schizoid Men" recordings and the original vinyl transfer of the "Earthbound" album.

As King Crimson approach their 50th anniversary next year, fans can only hope and pray that more of these outstanding releases see the light of day, as the vault of King Crimson music seems never ending. To find out more about this new 40th anniversary CD/DVD edition of "Earthbound," please visit schizoidshop.com/king-crimson.
Posted by JP's Music Blog