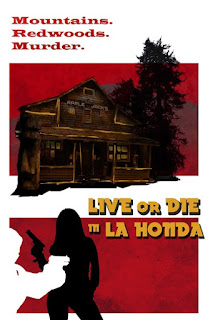 The independent suspense drama, "Live Or Die In La Honda" was recently release on VOD platforms, along with the exceptional soundtrack. The movie centers around the complicated relationship between Vic (Lili Bordan) and Blake (Blake Shields). She drags him back to the small town of La Honda on a guilt trip, after he vows never to return, which causes major trouble for everyone involved. The characters are hard to warm up to as director/writer/producer Jeff Hammer moves the story along at a very quick pace and the acting seems posed and not very natural. Many of the location spots that appear in the film are beautiful, but the rest of the town of La Honda seems cold and heartless. The placement of the music and songs is what keeps the emotions involved in this film as composer Paul Rudolph works in his original score with many great songs by undiscovered, independent artists.

The 15-track soundtrack is filled to the brim with modern Americana classics, like The Record Company's "Hard Day Coming Down," which opens the album with an aggressive, acoustic swinging rhythm. Singer/songwriters Will Fourt and Sheila Golden team up for the storied, nostalgic tones of "Early Bird Caleworth" and "Fire Scar Waltz." The Keller Sisters deliver a slinky, country sway with "The Rock Bottom" and then showcase their beautiful harmonies on "Hillbilly Blond." Highlights of the soundtrack have to be the Grateful Dead inspired "Eyes Of Stella Blue" by the Willie Nelson-sounding, Bundy Browne and The Expresso Rhythm Section, also the 9-minute epic blues tale of "Never Gonna Cry For Me" from The Record Company. Do yourself a favor and after you view this mysterious, crime drama, search out a copy of the soundtrack. Not only does the music help make certain scenes in the movie stand out, but these songs may also play a part in your own life. To find out more about the newly released movie and soundtrack to "Live Or Die In La Honda," please visit liveordieinlahonda.com.
Posted by JP's Music Blog