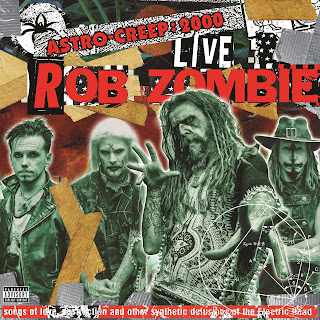 Arriving March 30th is the brand new live album from singer/songwriter/director Rob Zombie. The new release titled "Astro-Creep: 2000 Live" celebrates Zombie's 20th anniversary as a solo artist and is part of a new, lavish, limited edition vinyl box set, which includes all 11 of his solo albums. The new live album will also be available on it's own, as a 180-gram vinyl LP, and also in CD form and as a digital release.

The set was recorded at the Riot Festival in Chicago in 2016 and includes Rob Zombie's first ever concert performance of White Zombie's final studio album, "Astro-Creep: 2000." The entire album is performed from start to finish as you are instantly transported back to 1995. The organ introduction signals the beginning of "Electric Head, Pt. 1 (The Agony)" as Zombie enjoys being draw into this nostalgic trip. The show is just non-stop energy as "Super-Charger Heaven" and "Electric Head, Pt. 2 (The Ecstasy")" get an extra boost from Zombie's great backing band. The new live release also includes a stellar live version of one of Zombie's most well-known songs, "More Human Than Human" as you could only wish you were in the pit on that day in 2016. The new album closes with "Blood, Milk and Sky (same as "Astro-Creep: 2000") as Zombie always leaves you wanting more. To find out about the deluxe vinyl box set and about his new live album, "Astro-Creep: 2000 Live," please visit robzombie.com.
Posted by JP's Music Blog