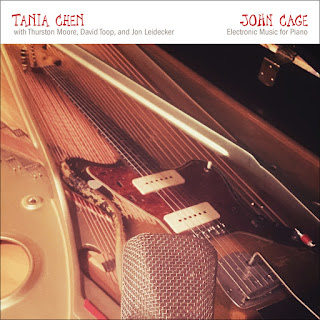 American music composer John Cage was a leading figure in the avante-garde movement and was one of the leading figures in the development of modern dance. Cage's musical career began in the 1930's and continued until his death in 1992. He inspired countless musicians to expand their musical horizons and on March 9th, U.K. based pianist Tania Chen delivers a new re-interpretation of Cage's "Electronic Music For Piano."

Chen, along with members of Sonic Youth, Negativeland and the Flying Lizards work together the re-create the nearly 70-minute, avante-garde instrumental piece. The exciting sound collage feels like a puzzle being put together as certain sounds don't always match up, but help understand and appreciate the overall musical idea that Cage developed back in 1964. While you may not listen to this on an everyday basis, it is also amazing to venture into the musical mind of one of the great American composers of the 20th century. To find out more about Tania Chen and her new release "John Cage: Electronic Music For Piano," please visit omnivorerecordings.com.
Posted by JP's Music Blog