Anthrax Become The "Kings Among Scotland" With New Live DVD 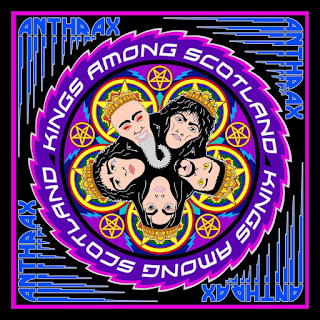 Heavy metal band, Anthrax have been riding a wave of resurgence with their music, which began about 8 years ago with their performance as one of the "Big 4​" of thrash metal music (along with Slayer, Megadeth and Metallica). The release of their album "Worship Music" in 2011 found the band receiving some of the best reviews of their career, as the album reached #12 on the Billboard album chart. Then, Anthrax did even better with their follow-up album "For All Kings," which debuted at #9 on the album charts and brought the band out on tour, performing to sell-out theaters and arenas all around the world.

To celebrate their achievements on the road, Anthrax are releasing a brand new DVD on April 27th, titled "Kings Among Scotland." In order to capture every angle of the show, the band used 17 different cameras, on cranes and Go-Pros to help portray to the viewer what exactly an Anthrax show is like. The way the show is filmed and cut, with the view changing every few second, allows you to feel the intensity and energy coming from every member of the band and the audience.

The band sounds amazing during classics like "Madhouse" and "Antisocial," while new songs like "Blood Eagle Wings" and "Breathing Lighting" sound like they have been perfected for the live setting. Lead singer Joey Belledonna works the crowd into a frenzy, while his vocals still sound timeless, especially during the second half of the show, which features Anthrax performing the entire "Among The Living" album. Guitarist Scott Ian shows his intensity on his face during songs like "Fight'em 'Til You Can't" and "Imitation Of Life."

The video of the show may be a little hard to get used to watching in the beginning as the camera jumps around so quickly, but you will soon get used to it and understand why this effect was given to the performance of the songs. The second disc in the set includes a 35-minute documentary of the tour as the members of the band give their insight into the shows and the fans love for their music. It also shows the set-up of the stage, the band preparing in the dressing rooms and on the tour bus. The other documentary to appear on the second disc is a 25-minute discussion on the instruments and gear used for each show as band memebers Scott Ian, Charlie Benante, Frank Bello, Jon Donais and all their tech guys give their insight into the set up of the gear for each and every show.

The new live album "Kings Among Scotland" will also be released as a 2CD set that includes all of the songs of the show. Anthrax are currently on the road in support of Slayer's last tour. For a complete list of shows and to find out more about their new live album, please visit anthrax.com.
Posted by JP's Music Blog