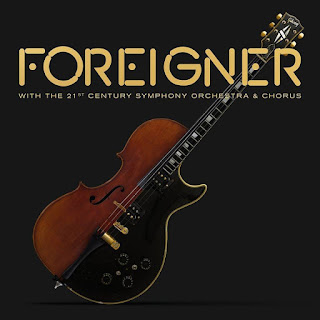 The classic rock band, Foreigner has pretty much done it all. They conquered the music charts, had a soap opera-like battle with their former lead singer and rose from the ashes to become one of the premier touring bands in America. Two years ago, they released "In Concert: Unplugged" to see how well their songs held up under stripped down, acoustic conditions. Now, Foreigner is doing the complete opposite on April 27th, when they unleash "Foreigner With The 21st Century Symphony Orchestra & Chorus." This new release will be available in a special edition CD/DVD digipak and also on double-vinyl.

Beginning with the intensity of the "Overture," this new 14-track album still rocks, but with a slightly more fulfilling, classical edge. Songs like "Cold As Ice" and "Feels Like The First Time" still have that classic hard rock edge, even with the addition of strings, while the ballads like "Waiting For A Girl Like You" and "When It Comes To Love" have a more lush feel that sounds like it was written for a large ensemble. The highlights of the show are the back-to-back epic rock numbers "Urgent" and "Jukebox Hero," with the latter song pushing past the 11-minute mark featuring the great guitar work of the legendary Mick Jones. The show closes with the big, sing along chorus of "I Want To Know What Love Is," in which everyone in the audience joins in.

Check out Foreigner on tour this summer with Whitesnake and Jason Bonham's Led Zeppelin Evening. To find out more about the newly released "Foreigner With The 21st Century Symphony Orchestra & Chorus," please visit foreigner-orchestral.com.
Posted by JP's Music Blog