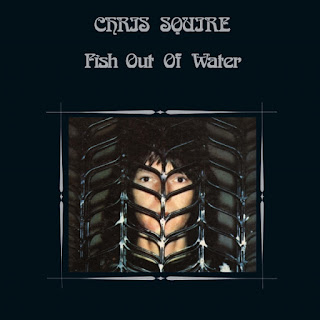 English musician Chris Squire was a founding member of the progressive rock band Yes and the only member to appear on every studio album, up until his death in 2015. To honor Squire and the release of his first solo album in 1975, Esoteric Recordings is re-issuing the album in a limited edition deluxe box set, which includes 2CD, 2DVD, 1 full-length LP and two 7-inch singles. The set will also be made available separately as a 2CD deluxe edition.

The first disc features Squire's "Fish Out Of Water" album as a brand new stereo remix, which was taken from the original multi-track tapes. The new remix gives the music an over-polished tone as everything sounds cleaner. The original album felt like an extension of Yes as many of Squire's friends from other bands like King Crimson, Soft Machine, The Moody Blues and Genesis support Squire's iconic sounding music. Squire would not follow up this solo album with another release until 2007's holiday album "Chris Squire's Swiss Choir."

Fans of Squire's music will love the second disc, which features the original 1975 mix, remastered, along with a couple of bonus tracks and Squire's only single "Run With The Fox" and its B-side "Return Of The Fox." The bonus tracks include the condensed singles versions of "Lucky Seven" and the epic piece "Silently Falling."

The first DVD included in the limited edition box set include a new 5.1 surround sound mix of the album, along with the new stereo mix included on the first CD. The second DVD features the visual content from the album, including a 1975 promotional film for the album, as well as an interview with Chris Squire from 2006, which promoted the a new remix of the album. To find out more about this amazing new reissue of Chris Squire's album "Fish Out Of Water," please visit cherryred.co.uk.
Posted by JP's Music Blog