Lisa LaRue Goes Back To Her "Origins" On New Anthology Release 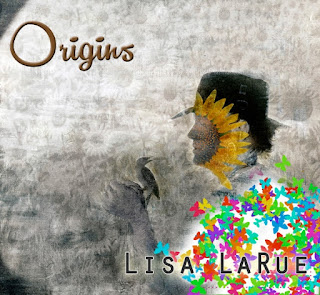 Keyboardist & composer Lisa LaRue recently released her brand new restrospective album titled "Origins." This double-album looks back at LaRue's 25 year career as she looks  back to the beginning with help from members of Asia, Saga, Talas, Gong and many more. The entire 2CD set clocks in at close to two hours, beginning with the exciting, energetic feel of "Kituwa" from her 2009 album "World Class." The new release continues with the beautiful solo keyboard instrumental "Hurtful Words," before returning once again to her 2009 album with the songs "In Camera" and "Beautiful Illusion." LaRue once again steps out on her own for the selection "Golden Birds Wrapped Within," written for the 1995 theater production "Voices Of The Shuka."

Disc two starts off with the back-to-back epic sonic adventures of the 13-minute worldly tones of "Jam Jahan Nima" and the slow, 18-minute build-up of "Prometheus" that concludes with a hard rocking clash of instrumentation. Lisa LaRue showcases her jazz fusion side with the power of "Beautiful Life" and the funky bass infused groove of "Sussuration." The new Lisa LaRue compilation concludes with the 13-minute, experimental, synthesized progressive rock of "Lemniscate" and the cassette-only release of the futuristic, space demo "Just Waiting For." To find out more about Lisa LaRue and her latest release "Origins," please visit lisalaruemusic.com.
Posted by JP's Music Blog