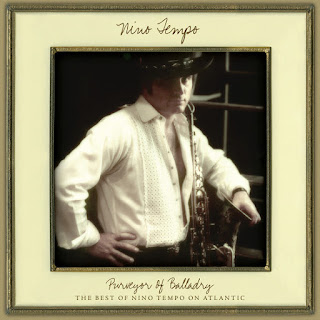 Arriving on April 13th is "The Best Of Nino Tempo On Atlantic" from Omnivore Recordings. Nino Tempo played sax for the legendary band, the Wrecking Crew and had a hit in 1963 with the song "Deep Purple." This new compilation centers around his 1990s jazz output when he was a member of Atlantic Records.

The new 13-song release begins with a live version of "Darn That Dream," as you are re-introduced to Nino Tempo's amazing work on the sax. The set continues with an instrumental only version of "This Masquerade" as you are shown why Tempo is known at the "Purveyor Of Balladry." This release also features April Stevens' skat-singing lead vocals on the exotic tones of "Amazon River" and Roberta Flack lending her talents to the gentle touch of "You Are So Beautiful." This album also includes Nino Tempo's rendition of classics like "'Round Midnight" and "Stella By Starlight," before closing with the appropriately titled "Goodbye." To find out more about this new compilation "Purveyor Of Balladry: The Best Of Nino Tempo On Atlantic," please visit omnivorerecordings.com.