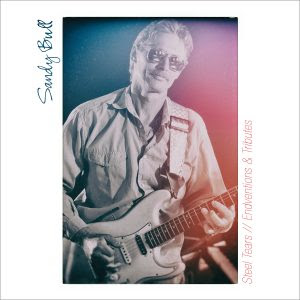 On April 13th, Omnivore Recordings is re-issuing the final album of American folk artist Sandy Bull. The new release of "Steel Tears" features a newly remastered sound of the original album along with eight bonus tracks. His style of guitar and banjo picking was an influence on a number of artists, as well as the way of overdubbing his music to be able to perform with himself. The album's original 10-track listing will showcase why Sandy Bull was a great artist, as songs like the country twang of "Old Habits Like You" and the quiet "It Should Be Easier Now" are pure emotional pieces. He injects his country/folk energy into the classic "My Baby Left Me" and finishes the original album with the swaying, soulful ballad "I May Never Pass Out."

The bonus tracks are where you find out how influential Sandy Bull was, as members of the Nitty Gritty Dirt Band and many other artists help complete some of Bull's last recordings. You can definitely tell that Sandy was just working with ideas in the studio as song like "Nagra Sarod" and "Nagra Guitar" are just instrumental tracks that sound almost complete, with just the need for words. Fellow artists Matraca Berg and Mickey Raphael deliver their own acoustic folk strumming of "Love Is Forever" and Keven Welch along with Jeff Hanna turn " I May Never Pass Out" into country gold. This new release finishes with a short studio jam and a quick goodbye of "Sandy's Last Words." To find out more about Sandy Bull and the new re-issue of his album "Steel Tears," please visit omnivorerecordings.com/shop/steel-tears.
Posted by JP's Music Blog