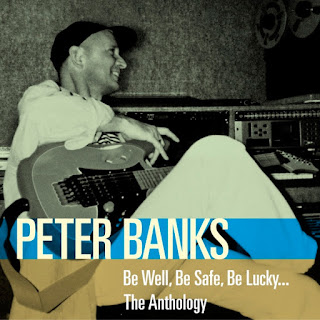 Guitarist extraordinaire Peter Banks had a history in music that lasted over 40 years. He was an original member of the band Yes, before going solo in the early seventies. Banks was also one of the founding members of the band, Flash and continued writing and recording music write up until his death in 2013. To honor his memory, Cherry Red Records (through his Estate) is releasing a 2CD anthology of his solo work titled "Be Well, Be Safe, Be Lucky... The Anthology."

The set includes songs from all five of his solo albums, as well as music Banks created for the Yes tribute album "Tales From Yesterday" and his work from Flashback with Gerard Johnson. The 30-song set contains many exceptional spotlights into Banks' talent for playing guitar. Songs like "The Age Of Distortion" and "Tone Down" are great examples that show how Banks was never afraid to stretch beyond the norm to create exciting pieces of music.

It's a treat to hear him perform the classic "Peter Gunn Theme" live, and then switch gears for the jazz fusion appeal of "Dancing Angel." The set does include the previously unreleased "Knights (Revisited)," which was originally just an incomplete guitar solo that was completed posthumously by his former bandmates Tony Kaye, Billy Sherwood and Jay Schellen. The set closes with the nearly 20-minute progressive rock epic "Small Beginnings" and the quiet, atmospheric finish of "No Time." To find out more about the new Peter Banks anthology, "Be Well, Be Safe, Be Lucky...The Anthology," please visit cleorecs.com. 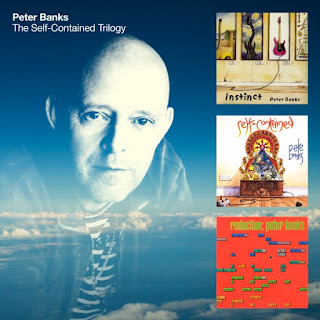 Also available from Peter Banks's estate is the new 3CD set titled "The Self-Contained Trilogy," which features all three of his solo album from the 90's. All of the music in this set has been newly remastered and the set includes all of the original album artwork along with some new added pieces. For those that have all three album ("Instinct," "Self-Contained" and "Reduction"), you may want to upgrade for the new improved sound and to have all 3 discs in one case. To find out more about Peter Banks's "Self-Contained Trilogy," please visit cherryred.co.uk.
Posted by JP's Music Blog