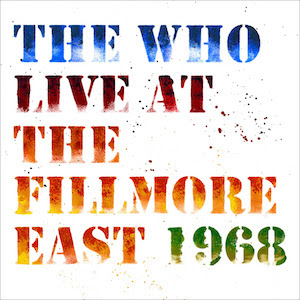 Back in 1968, The Who were on the brink of global stardom. They were in the midst of recording the epic rock opera "Tommy" and would be featured as one of the premier acts at the legendary "Woodstock" festival. To keep their name in the spotlight between the release of their third full-length album "The Who Sell Out" and "Tommy," The Who embarked on a U.S. tour in early 1968. The band were planning to conclude their tour on April 4th, the day Dr. Martin Luther King Jr. was assassinated, but ended up being pushed back to April 5th and 6th with two final performances at the iconic Fillmore East venue.

The shows were described as "lively" as The Who were planning on recording the shows for a possible live release, but technical problems caused most of the first show not to be recorded. The second night was recorded in full, and to celebrate the 50th anniversary of these shows, Geffen/Universal Music Enterprise is releasing the show for the first time on double-CD and triple vinyl.

The Who "Live At The Fillmore East 1968" will be released on April 20th and features the second show's entire 14-song set, beginning with their classic covers of Eddie Cochran's "Summertime Blues" and Allen Toussaint's "Fortune Teller." One of the best things about this new live release is not only the energy that The Who put into every song, but also the in-between speeches by Pete Townshend, describing many of the songs they performed that evening.

The show included epic performances of their songs "Relax" and the mini, rock-opera "A Quick One While He's Away." They would head toward the end of their show, performing a trio of cover songs, including more from Eddie Cochran ("My Way" and "C'mon Everybody") and "Shakin' All Over" originally by Johnny Kid And The Pirates, before finishing the night with a 30-plus minute version of their classic hit single, "My Generation." The song takes up the entire second disc in the set and concludes with the well-known demolishment of instruments. To find out more about new release "The Who Live At The Fillmore East 1968," please visit thewho.com.
Posted by JP's Music Blog