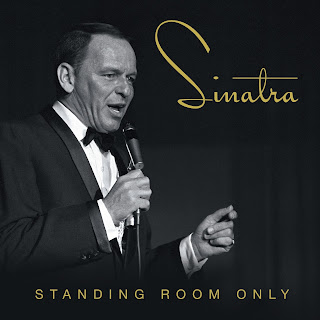 The legendary Frank Sinatra still has unreleased shows in the vault, and they will see the light of day as part of the new release titled "Standing Room Only." This new 3CD set features three shows (1-previously released on CD), which clock in at almost 3 1/2 hours and showcase the different eras of Frank Sinatra's musical style.

The first disc features the previously released January 28th show from 1966 at The Sands in Las Vegas. This show is Sinatra at his best as he sings his heart out during "Street Of Dreams" and "You Make Me Feel So Young." His in-between song banter is timeless as you feel as if you are at The Sands, back when the Rat Pack were the top music act in the country. Sinatra was the perfect showman in sixties as he sang with heart and passion, as in "The Shadow Of Your Smile," but also gave the audience a light-hearted, playful time, singing as with "My Kind Of Town."

The second disc features a previously unreleased concert from 1974, when Frank Sinatra visited The Spectrum in Philadelphia. He was feeling a resurgence in popularity, following his short retirement and he seemed renewed, performing in front of audiences once again. The show is a greatest hits extravaganza as Sinatra performs the classics, "I Get A Kick Out Of You," "I've Got You Under My Skin" and "Send In The Clowns." The highlights of the show is Sinatra's beautiful rendition of "Ol' Man River" and a swinging version of Stevie Wonder's "Sunshine Of My Life." I'm not sure why this show stay unreleased for so long, because it is great piece of Sinatra's history.

The third disc features Frank Sinatra performing live at Reunion Arena in Dallas, TX in 1987. Part of this show was previously released, but this is the first time that it is presented in its entirety. This show featured the autumn years of Sinatra's live performances as he works in many of his well-known concert staples like "Summer Wind," "When Joanna Loved Me" and "Theme From New York, New York." You can hear the aging of his voice in the ballad "You Will Be My Music," but Frank can still deliver the energy, as displayed in "Mack The Knife." After performing his second Stevie Wonder number ("For Once In My Life"), Frank Sinatra closes out the evening with his signature tune, "The Lady Is A Tramp." This new 3CD set will be released on May 4th and includes a 30-page booklet that includes brand new liner notes and rare, unreleased photos. To find out more about Frank Sinatra "Standing Room Only," please visit sinatra.com.
Posted by JP's Music Blog