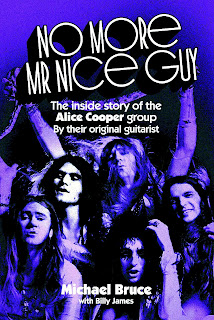 Original guitarist/keyboardist for the Alice Cooper Group, Michael Bruce, set the story straight as to the rise of the band and how it splintered; in a new book titled "No More Mr. Nice Guy." The best thing about this new book are the first hand recollection of the stories as to how hard the Alice Cooper Band worked to become one of the top music acts in the seventies.

Michael Bruce, along with Billy James, gives us exclusive insight into the recording of the band's early albums and the preparation for their live shows. The book also touches upon the shift in power within the band, from bass player Dennis Dunaway to lead singer, Vincent Furnier. The 118-page story contains 40 pages of black & white photos, concert posters and early press material for the Alice Cooper Group. The first six chapters follow the rise in popularity of the band as they became a phenomenon on the live scene, before band leader Vincent Furnier put an abrupt end to the band and took over the name Alice Cooper as a solo artist with a new band as the seventies came to a close.

The final two chapters catch the reader up with the life of Michael Bruce as he dealt with the struggles of a solo career and the passing of his close friend and bandmate Glen Buxton. The happy ending, if there is one, is that Michael Bruce was inducted into the Rock And Roll Hall Of Fame in 2011 as a member of the Alice Cooper Group. Bruce still rocks out with his latest band, the Michael Bruce Force and has also played on few songs with Alice Cooper on his latest albums. To find out more about this newly published book "No More Mr. Nice Guy" and other releases from Michael Bruce, please visit pledgemusic.com.
Posted by JP's Music Blog