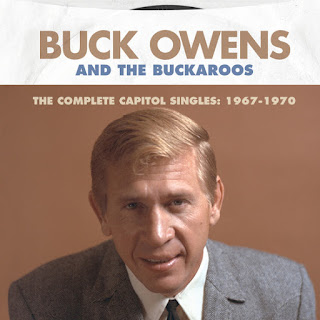 Just two years ago, Omnivore Recordings released the first batch of Capitol Singles from legendary country artist, Buck Owens and the Buckaroos. Now on May 11th, the next set of singles will be released as "The Complete Capitol Singles: 1967-1970." It features 36 songs spread across two discs, beginning with the popular #1 single "Sam's Place" along with the original single B-side "Don't Ever Tell Me Goodbye." This four year span would produce 14 top ten hits, including "Your Tender Loving Care," "How Long Will My Baby Be Gone" and "I've Got You On My Mind Again." One of the greatest things about this collection is that all of the B-sides to these hit singles are also included.

The second disc finds Buck Owens and the Buckaroos entering more pop territory with the 1969 #1 country single "Who's Gonna Mow Your Grass" as he breaks away from the acoustic guitars and plugs in on this track. This disc also includes a couple cover songs, including a live recording of Chuck Berry's "Johnny B. Goode" and Freddie Hart's "Togetherness." The set closes with Owens last top ten hit of 1970 with the mosey-on tone of "I Wouldn't Live In New York City (If They Gave Me The Whole Dang Town)" and it's B-side "No Milk And Honey In Baltimore." To find out more about the latest set of "The Complete Capitol Singles: 1967-1970" from Buck Owens and the Buckaroos, please visit omnivorerecordings.com. 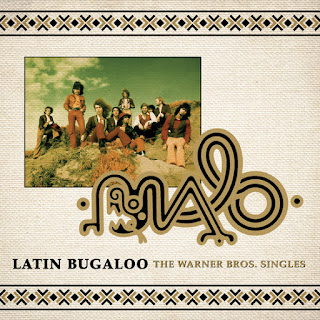 Arriving two weeks later on May 25th from Omnivore Recordings is "Latin Bugaloo: The Warner Bros. Singles" from Latin/rock band Malo. Based out of San Francisco, the band Malo was led by Arcello Garcia and Jorge Santana (brother of Carlos Santana) and released a string of very successful albums between 1972-1974. They are also known for their single "Suavecito," which was a Top 20 hit for band. To celebrate the band's 45th anniversary, Omnivore collected seven of Malo's singles that were released during their time on the Warner Brothers label and matched them up with their B-side for this new release.

Beginning with the song "Suavecito," you can instantly hear the timeless quality in their music. Malo showcase their Latin roots on songs like "Cafe" and "Pama," while some of the B-side display the band's big rock sound as in "Peace" and "Nena." As the compilation rolls on, you notice the band's sound change to softer, pop melodies as with "I Don't Know"  and "Love Will Survive." To find out more about this new compilation of hits from Malo, please visit omnivorerecordings.com.
Posted by JP's Music Blog