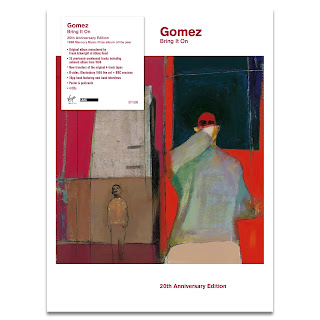 Indie U.K. rockers Gomez has continued to ride a wave of success in their home country, since their debut album in 1998. Here in the U.S. their popularity has grown steady over the last ten years, with their last two albums cracking the top 100 on the Billboard album chart. The band has been on hiatus over the course of the last seven years, but Universal Music is looking to remind fans of their great music with the new 20th anniversary super-deluxe edition release of their debut album "Bring It On."

A 10th anniversary, 2CD deluxe edition of the album was released back in 2008 and has sold over half-a-million copies. Now, on May 18th, this 20th anniversary release will double in size as this new 4CD set includes the original 12-song album remastered with an additional 35 previously unreleased tracks, including 25 demos recorded prior to the band's debut album.

The "Bring It On" album received the Mercury Music Prize upon its release and received rave reviews in the U.K. and in the U.S. The newly remastered release cleans up the band's raw, indie sound, almost too much, but all of the instruments are clear and up-front along with the vocals. Songs like "78 Stone Wobble" and "Here Comes The Breeze" benefit from the new remastered sound as the harmonies flow together more cohesively. The raw blues of "Bubble Gum Years" sounds a little too clean, but the entire album sounds better than it ever had before.

The second, third and fourth discs are where the treasures are hiding as Gomez cleared out the vault for this release. Of the 41 songs that make up these discs, only 16 songs have been previously released. Most of songs are made up of demos that were passed along to get signed to a label and are in very good quality. The third disc features acoustic, folk rock versions of songs that would eventually appear on the album ("Get Miles," "Tijuana Lady" and "Rie's Wagon"). Some of the more obscure recordings that were originally recorded on the band's 4-track demo appear in a rough, unmastered form, but are very welcome to the collection as you can hear the way the band constructed their songs.

The fourth disc features the six songs that Gomez recorded live at the BBC, which were also featured on their 10th anniversary release. A nice new addition to this set is 11-song set from the 1998 Glastonbury Festival. The set includes many songs from their debut album, plus early songs like "Buena Vista" as the show closes with a cover of The Doors' "Soul Kitchen" and "Whippin' Piccadilly." The new anniversary edition of Gomez' debut album "Bring It On" will also be released as a 2LP deluxe set. To find out more about this new release, please visit gomeztheband.com.
Posted by JP's Music Blog