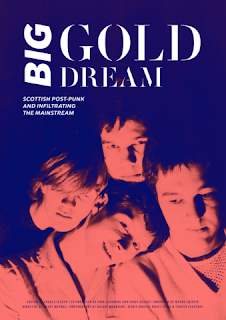 Back in the late-seventies/early-eighties, there were these two small, independent music labels (FAST Product & Postcard Records) located in Scotland that helped shape the world of post-punk/independent music in the U.K. Most of the world is unaware of their importance to the modern day music scene, but a new documentary titled "Big Gold Dream" helps with the missing link to today's alternative/punk music.

Director Grant McPhee does and outstanding job using classic raw film footage and interweaving interviews to describe the music scene in Scotland, beginning in 1977 with the arrival of The Clash. The film follows the development of the FAST Product label as they would release singles by bands like Scars and Gang Of Four. The discovery of The Human League helped the FAST label skyrocket in sales, but the documentary describes that it was more about the discovery of new acts for Bob Last and Hillary Morrison. After only two years, Bob decided to close the FAST Product label down, but their inspiration still echoes in today indie-market.

Another label that was started in Glasgow by Alan Horne, took a different approach to signing new music. The label was named Postcard and took on bands with a cleaner, more polished, "post-punk," pop sound. Their flagship band was Orange Juice and the Postcard label was a low-key outfit by hand-coloring the covers of their singles with magic marker. The label also signed The Go-Betweens and Aztec Camera as the film states that Postcard rivaled FAST as two of the fastest rising music labels in Scotland. While the Postcard label lasted just as long as FAST Product, these two indie music labels may have laid the blueprint for building your own independent music recording label.

It's great listening to every artist's story first hand, re-collecting their triumphs  during that time period. Getting the stories first hand, gives a great authenticity to that specific time period when the world of music was changing. To find out more about the documentary "Big Gold Dream," please visit facebook.com/SOYSFilm.
Posted by JP's Music Blog