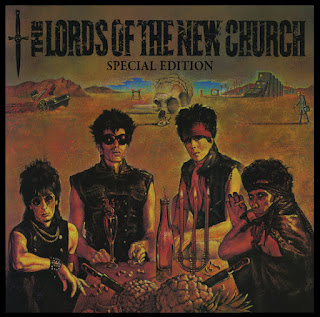 Goth/punk supergroup, The Lords Of The New Church are re-visiting their self-titled debut album for its 35th anniversary. On July 20th, Blixa Sounds Records will reissue the album as a 2CD set, which includes a previously unreleased live show from 1982. The first disc features the band's original 10 track album, along with 3 bonus tracks, made up of the B-sides "Girls Girls Girls" and "Young Don't Cry," along with the single version of "Open Your Eyes." The band, made up of members of The Dead Boys, The Damned, Sham 69 and The Barracudas played their music with extra attitude and energy as they felt they had something to prove. The early days of the band brought out more of a punk feel to their music with songs like "Eat Your Heart Out" and "Li'l Boys Play With Dolls," while the dark, gothic tones of "Open Your Eyes" and the underground, new wave song "Holy War" showcase the band's transition to a modern, eighties rock sound.

The second disc features The Lords Of The New Church performing one of their first live shows at My Father's Place in Long Island, NY in 1982. The 13-song set features the band performing every song from their debut album, with just an extra jolt of energy with the live setting. The set even includes the rare B-side "Girls Girls Girls" as you can almost hear the audience shouting along to the chorus of this new band. The show did include one live cover of "Fortune Teller" (made famous by The Who and The Rolling Stones), performed with punk-like abandonment. The disc closes, much like it began, with the band's theme song "New Church." To find out more about this new 2CD deluxe re-issue of The Lords Of The New Church's debut album, please visit blixa.com/lords-of-the-new-church.
Posted by JP's Music Blog