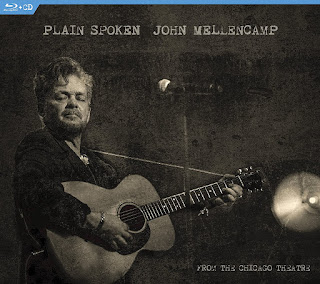 Singer/songwriter John Mellencamp brings it all back home with his latest release "Plain Spoken: From The Chicago Theatre." It features a live show/documentary as Mellencamp gives a personal narration during the show as he delivers voice-overs during the concert. The show includes songs from his last studio album, "Plain Spoken" mixed with many of his pop classics like "Small Town," "Pop Singer" and "Paper In Fire."

The story begins with Mellencamp recollecting his visit to New York to try and score a record contract. At times, the music just seems like background fill as the story Mellencamp is telling us does not fully relate to the song being performed, but his voice is so stern that you find yourself listening intently. The music fades in and out as the story continues, which can become annoying as you feel like your getting into the music and then it fades out and breaks up the energy you get from a live show. It may have been better for Mellencamp to create new instrumental music to have in the background of the story as he told us his memories of growing up.

The stories are wonderful and eye-opening as John tells us these tales first-hand as you find yourself hanging on his every word. As you reach the finale of the show, when Mellencamp performs a couple of his biggest singles, "Pink Houses" and "Cherry Bomb," you feel that you completed this journey with him and feel a little closer to the person and performer that John Mellencamp has become. The one lesson he wants you to take with you from his talk is that, "there is no reward in this world for settling for something you don't want."

The new release "Plain Spoken: From The Chicago Theatre" premiered on Netflix back in February and was recently released on DVD+CD, Blu-ray+CD and in digital format. A nice bonus is that the entire concert is available, without the voice-overs, so you can fully enjoy the magic of the cinematography.  The energy of the show is felt through the screen as you in the audience with his fans one minute, then the next you are on stage right next to him. The CD included in this set sounds outstanding for a live show as it includes all the music from the entire show. To find out more about this newly released live album "Plain Spoken: From The Chicago Theatre," please visit mellencamp.com.
Posted by JP's Music Blog