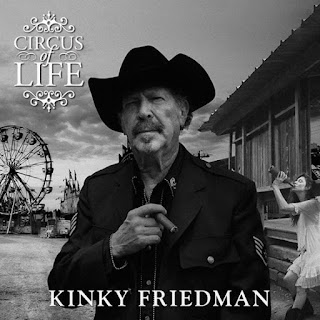 Arriving just in time for Independence Day, is the brand-new studio album from the out-spoken American icon, Kinky Friedman. His new album, "Circus Of Life" is his first release of original new tunes in four decades. At 73 years old, Kinky Friedman is following up the release of his new album with a two-month long summer tour, which kicks off June 20th in Nacogdoches, Texas.

Kinky Friedman has worked with everyone from Bob Dylan to Willie Nelson, as a random call from Nelson sparked Friedman to make this new album. Kinky starts off his new 12-track album with the recollection of his career with "A Dog Named Freedom" and the bluegrass/folk swing of "Copper Love." One of the highlights of this new album is the storied tale of "Jesus In Pajamas" as Friedman paints the perfect picture in your mind with his words. The steady country strumming of "Autographs In The Rain" is Kinky's way of repaying Willie Nelson for all his help. The quietness of "Back To Grace" and "Song About You" demand your concentration as you follow Kinky's every emotional word. He wraps up his new album with "Me & My Guitar" as Friedman sings about his first love and what may be his final words with "Sayin' Goodbye." To find out more about Kinky Friedman and his latest release "Circus Of Life," please visit kinkyfriedman.com.
Posted by JP's Music Blog