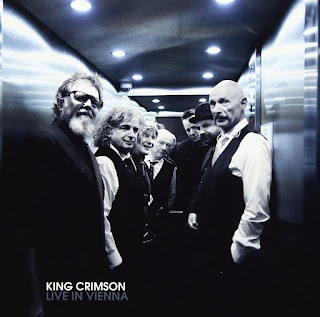 For the past year, King Crimson have been rolling out new live albums as soon as possible to highlight, what original member Robert Fripp has called the best line-up in decades. Their latest 3CD set was recorded "Live In Vienna, December 1st, 2016" and sounds exceptional.

The first disc features the entire first set of the show as the band get things rolling with the nearly 50-year old classic "Pictures Of A City." The music get funky with the horn-infused Mel Collins rhythm of "Vroom" and deep, steady Tony Levin bass groove of "The ConstruKction Of Light," before reaching the pinnacle of the first set, the crowd favorite "The Court Of The Crimson King." The song is so well constructed that you are instantly transported back to 1969.

The second disc (which includes the entire second set) begins slowly with a couple of short instrumentals ("Fairy Dust Of The Drumsons" and "Peace: An End"), before reaching a string of classic epic pieces like "Epitaph" and "Easy Money." King Crimson finish of the second set with the frenzy of "Larks' Tongue In Aspic Part Two" and the beautiful, serene wonder of "Starless."

The third disc features extras specials for long-time fans, including the rarely performed song "Fracture." It was recorded live only once during the 2016 tour in Copenhagen. The disc also includes the encore of "Heroes" and "21st Century Schizoid Man" from the Vienna show and closes with 18-minutes of soundscapes edited together to form new magical pieces of music, made up of the improvisation that went on between Robert Fripp, Mel Collins and Tony Levin. To find out more about King Crimson's new live album "Live In Vienna, December 1st, 2016," please visit glassonyonpr.com.
Posted by JP's Music Blog