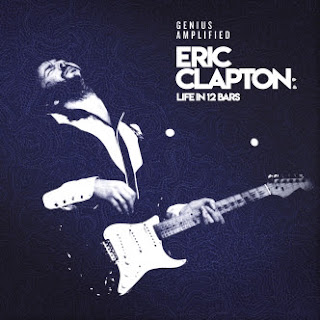 Back in February, Showtime debuted a new documentary title "Eric Clapton: Life In 12 Bars." It is the first, full-length film that included input, first-hand, from Clapton on his life and musical career. On June 8th, Universal Music Enterprises along with Eagle Vision released the documentary on DVD and Blu-ray, along with it accompanying soundtrack.

The documentary begins with a home video of Clapton thanking the late, great B.B. King upon his passing in 2015. Then we head back to the beginning as Clapton gives us insight into his childhood and early school years. The film is a little slow in the beginning, before he joins The Yardbirds, then all of his musical doors open up. One of the highlights of the documentary is how Eric's guitar techniques in the studio has made the instrument the prime focus of recordings by John Mayall's Bluesbreakers and Cream.

According to the film, it just seems like Eric Clapton was in the right place at the right time. As Cream are recording in the studio, he gets asked to play with Aretha Franklin, then he becomes friends with George Harrison and gets invited to play guitar on The Beatles' "White Album," just as Cream was breaking up. The documentary also touches upon Clapton's drug abuse and seclusion, but sticks mostly to the music that he was creating during the seventies. The film does an amazing job getting input from everyone involved in Clapton's extensive catalog, including George Harrison, John Mayall, Steve Winwood and B.B. King and shows classic film footage of interviews that Clapton gave throughout his career.

The soundtrack, which was released the same day, features 32-songs that cover some his early influences, all the way up to his best selling single, "Tears In Heaven." The set includes 7 previously unreleased tracks from Cream, Derek And The Dominos and from his solo material. Highlights include his work with Aretha Franklin on "Good To Me As I Am To You" and a 17-plus minute live version of Cream's song "Spoonful," as well new mixes of Clapton classics "After Midnight" and "Let It Rain." Other gems on this new release are the nearly 7-minute version of Bob Marley's "I Shot The Sheriff" and his rocking cover of "Little Queenie," recorded live at the Long Beach Arena in 1974. I only wish that Clapton's 1980's output wasn't left off, since it includes some timeless songs like "She's Waiting" and "It's In The Way That You Use It," but that could be argued for another Eric Clapton compilation. To find out more about the newly released "Eric Clapton: Life In 12 Bars" documentary and soundtrack, please visit whereseric.com.
Posted by JP's Music Blog