Rediscover The Works Of Guitarist Mick Ronson With New "Beside Bowie: The Mick Ronson Story" Soundtrack 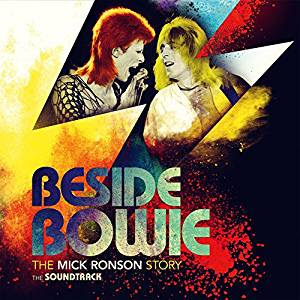 Back in May 2017, a film was released that gave fans insight into the guitarist that helped turn David Bowie into a megastar in the 1970s. This legendary guitarist was Mick Ronson, who's life was cut short by cancer in 1993. A DVD/Blu-ray of the film, titled "Beside Bowie: The Mick Ronson Story" was released in October of last year (review: jpsmusicblog.blogspot.com), and now finally we get the amazing soundtrack, which was released on June 8th.

The new 14-song album begins with one of Mick Ronson's last accomplishments as he performed alongside David Bowie, Ian Hunter, Joe Elliot and Queen as part of The Freddie Mercury Tribute Concert in 1992. The song, "All The Young Dudes" was the last public appearance by Ronson as he shined so bright one last time on stage. Then, the soundtrack dives back into the past with Ronson's appearances on classics like Michael Chapman's "Soulful Lady," Elton John's "Madman Across The Water" and of course Bowie's "Moonage Daydream" and "Cracked Actor."

The soundtrack, as well as the film, also showcases Mick Ronson's solo career and includes a couple of songs ("I'd Five Anything To See You" and "Hard Life") from his previously unreleased album "Just Like This," which was recorded in 1976, but not released until 1999. The set concludes with Mick Ronson teaming up once again with David Bowie on Bob Dylan's "Like A Rolling Stone," which was one of Ronson's last studio recordings and another glance at Ronson's last public appearance, performing "Heroes" live with David Bowie and Queen.

The "Beside Bowie: The Mick Ronson Story" soundtrack was released in a number of different formats, including digitally, CD and limited edition colored vinyl. To find out more about this great new release, please visit udiscovermusic.com.
Posted by JP's Music Blog