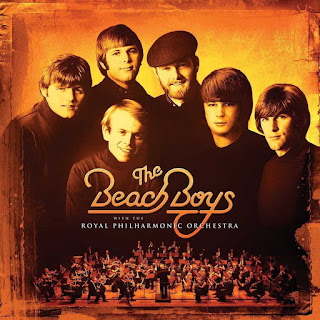 With a catalog as extensive as The Beach Boys, what is there left to do with their timeless music? The latest trend has been to add an orchestra behind some of music's biggest artists, but not just any orchestra, the Royal Philharmonic Orchestra. First was Elvis back in 2016, then Roy Orbison in 2017, now its The Beach Boys turn to have some of their greatest hits given the orchestral treatment.

The new compilation titled "The Beach Boys With The Royal Philharmonic Orchestra" will see a worldwide release on June 8 through Capitol/UMe. It features 17-tracks that take existing classics from The Beach Boys and adds brand-new musical arrangements performed by The Royal Philharmonic Orchestra. This would not be an easy task, since many of this songs are so well known by their fans that the slightest addition or adjustment may not work, but you could not be more wrong.

A short instrumental piece "California Suite" leads into "California Girls" as the addition of horns and strings only enhances the overall song. Many of the band's earlier hits are taken up a notch as songs like "Fun, Fun, Fun" and  "God Only Knows" get filled with the lush arrangements that gives The Beach Boys music a cleaner, more modern sound. The beautiful harmonies of "In My Room" and "The Warmth Of The Sun" sound more complete, as if the group originally recorded these songs with the intention of using an orchestra. There are also a few songs on this new compilation that did not need the addition of strings and horns, as "Kokomo" sounds less tropical and "Good Vibrations" was already perfect and now seems overdone.

This compilation does showcases what amazing singers and songwriters The Beach Boys were, in order for there music to be given the orchestral treatment and still have and outstanding and timeless quality. To find out more about the newly released "The Beach Boys With The Philharmonic Orchestra," please visit thebeachboys.com.
Posted by JP's Music Blog