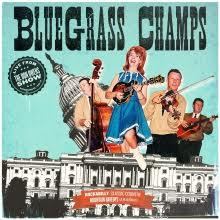 Arriving July 6th from Yep Roc Records is a previously unreleased live album from Bluegrass Champs, titled "Live From The Don Owens Show." The band centered around Country Hall of Fame inductee Pop Stoneman and his talented family and this new live release is proof of that talent. It was recorded by Leon Kagarise from the original, late 1950's broadcast, and has laid dormant all these years.

The new 18-song release begins with the swift pace of "Little Cabin Home On The Hill" as Pop leads the way with his wife providing harmonies on the chorus. The new release is filled with the standards like "Goin' Crazy," "Tequila" and "I Can't Stop Loving You." The Bluegrass Champs have no problem keeping the energy flowing with "Rock-A-Bye Boogie" and "I Want To Be Loved (But Only By You)," before the album closes with the rockabilly flurry of "No Help Wanted." To find out more about this newly released live album from the Bluegrass Champs, please visit yeproc.11spot.com.
Posted by JP's Music Blog