Britney Spears Unleashes Her "Piece Of Me" Show Upon Connecticut 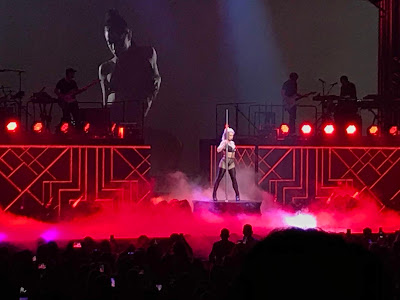 Pop icon Britney Spears hand-picked the Mohegan Sun Arena as one of only a dozen U.S. stops on her current "Piece Of Me" tour, which mirrors her record-breaking Las Vegas residency. Her last tour was over seven years ago and four of those years were taken up by her headlining Vegas show "Britney: Piece Of Me." So, Sunday night became extra special as it was only the second stop on what is considered to be one of the last times that Britney will ever perform the "Piece Of Me" show.

Screams of "Britney" rang throughout the arena as she took the stage just before 8pm, to perform the high-energy numbers, "Work B**ch" and "Womanizer." She dazzled the audience with her sparkled bikini and thigh-high boots, as her male and female dancers supported her every move. The 90-minute show was broken up into seven different acts that reflected her Las Vegas show, but in a much more scaled-down version.

Her long-times roared at every dance move during the performance of her early hits "Baby One More Time" and "Oops!...I Did It Again." The choreography was stellar throughout the evening as Britney and her back-up dancers poured their all in the club-like dance numbers "Me Against The Music" and "Gimme More."

Laser lights bounced off the walls during "Boys" and "Do You Wanna Come Over?," before her dozen or so back-up dancers had a "dance-off" during the medley of "Work It/Get Your Freak On/WTF (Where They From)." The fifth act became a little more provocative with the slower, grinding rhythm of "I'm A Slave 4 U" and "Make Me." Britney invited a male member of the audience to crawl on all fours during "Freakshow," as she encouraged the audience to give him a big round of applause for being a good sport. It was one of only a few times that Britney addressed the audience as she remained focus for the evening's entire performance.

She closed her show with the final act, supported by her fans, as Britney and her dancers gave up every last bit of energy performing the favorites "Toxic" and "Stronger/(You Drive Me) Crazy." After a quick bow, she jumped right into the uplifting closer "Till The World Ends" as confetti rained down throughout the arena. Britney Spears will wrap up her "Piece Of Me" U.S. tour later this month, before she heads over to Europe for a month of shows. Fans can only wait in anticipation as to what the pop icon has in mind for her next adventure.

Setlist: Work B**ch, Womanizer, Break The Ice/Piece Of Me, Baby One More Time/Oops!...I Did It Again, Me Against The Music, Gimme More, Clumsy, Change Your Mind (No Seas Cortes), Boys, Do You Wanna Come Over?, I'm A Slave 4 U, Make Me, Freakshow, Do Somethin', Circus, If U Seek Amy, Breathe On Me, Slumber Party, Touch Of My Hand, Toxic, Stronger/(You Drive Me) Crazy, Till The World Ends
Posted by JP's Music Blog