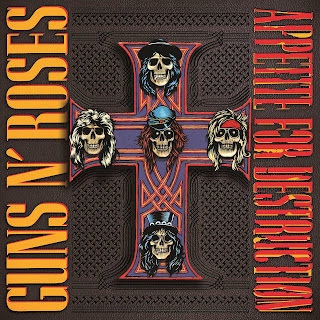 The legendary Guns N' Roses album "Appetite For Destruction" is considered by many to be the best debut album every released by a band. Since its release, the album has sold over 30 million copies worldwide and spawned three top ten singles. To celebrate the 30th anniversary of this monumental album, Geffen/UMe unleashed a new box set titled, "Appetite For Destruction: Locked N' Loaded Edition." It features 51-tracks, spread across four CDs and just nice as the music, is the 96-page book, which is also great and includes photos from Axl Rose's personal collection.

The first disc of this set includes a brand-new, remastered version of the album. The music sounds outstanding with more punch to the drums, as Axl's vocals are clear and you can hear the dual guitar attack of Slash and Izzy Stradlin on songs like "Mr. Brownstone" and "You're Crazy." Duff's bass motors through "Its' So Easy" and "Anything Goes," while Steven Adler shuffles through the album closer "Rocket Queen" with a jazz-like groove.

The second disc of the set includes all of the B-sides and the GN'R "Lies" EP, plus a rare live versions of the non-album song "Shadow Of Your Love." The disc also features early live cover versions of Bob Dylan's "Knockin' On Heaven's Door" and AC/DC's "Whole Lotta Rosie," both of which are still performed live to this day.

Longtime fans will enjoy the 27 unreleased tracks that make up the third and fourth discs of this set. Gun N' Roses entered Sound City Studios to record their debut album and we have almost an entire alternate version of the album from these sessions. The music is a little more raw and some songs are less developed than the finished product like "Paradise City," which closes with an out of control, punk-like ending. The band also recorded rare cover versions of "Heartbreak Hotel" and "Jumpin' Jack Flash," as well as early versions of "November Rain," which would become the pinnacle single of the "Use Your Illusion" albums. The set closes with another unreleased rarity, an acoustic version of "Move To The City," which was recorded during the "Lies" sessions, but never released until now.

The deluxe "Locked N' Loaded Edition" also includes a Blu-ray audio which includes a 5.1 surround sound version of the original album along with a handful of bonus tracks. The music videos for "Welcome To The Jungle," "Sweet Child O' Mine," "Paradise City" and "Patience" are also on the Blu-ray, as well as a brand new video of "It's So Easy" filmed in 1989.

If the 4CD/Blu-ray "Locked N' Loaded Edition" is out of your price range, there is also a 2CD deluxe edition, which includes the new remastered version of the album and an 18-track "B-Sides, EPs N' More" bonus disc. A 2LP 180-gram heavyweight vinyl edition is also available with a special 3-D hologram on the 4th side of the set. To find out more about this amazing new box set from Gun N' Roses, please visit gunsnroses.com.
Posted by JP's Music Blog