Check Out The Soundtrack To The New Stephen King Thriller "1922" 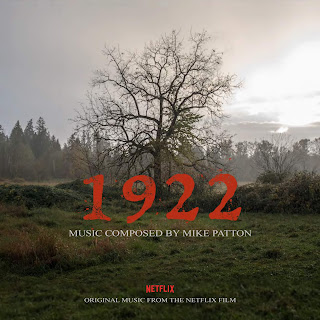 Netflix recently unveiled the latest thriller from Stephen King titled "1922." The story revolves around a man's confession of his wife's murder, after his life unravels because he is convinced that his wife is haunting him from beyond the grave. The new soundtrack for "1922" will be released on July 20th, through Ipecac Recordings and features the work of Mike Patton (Faith No More). Patton has worked on a number of other films, including "Crank: High Voltage" and "The Place Beyond The Pines."

The 21-track new release includes sound excerpts from the film as Patton works in the spookiness to give the soundtrack a thrilling listen on its own, away from the movie. The lush strings of the "Sweetheart Bandits" showcases a different side to what fans of Mike Patton's music may be used to, but keeps your emotions in check on the eerie tones of "Omaha 1930." The creepy sound of "Thick As Thieves" and "Mea Culpa 2" will have you looking over your shoulder as you listen to this amazing new soundtrack. The sound of rodents scurrying and the dark tones of "Dead Woman's Secrets" are the perfect recipe for a Stephen King thriller. To find out more about the "1922" film and soundtrack, please visit netflix.com.
Posted by JP's Music Blog