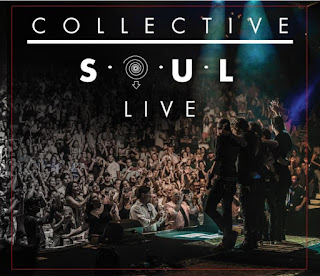 American rockers Collective Soul are hitting the road this summer with fellow rockers 3 Doors Down to give fans a night filled with classic guitar riffs and arena fueled anthems. The tour runs well into September as Collective Soul will be celebrating their 25th anniversary in 2019. The band are touring behind their latest release, a live album simply titled "Collective Soul: Live."

The new 17-song album gives fans a great insight into what they can expect from the band during this current tour. Collective Soul showcase a renewed energy in songs like "Heavy" and "Shine," which helped put the band on the musical map in the nineties. They perform "December" with a raw rock appeal and you can see the lighters (or cell phones) lighting up the arena for the acoustic ballad "The World I Know." The band's musicianship shines on the seven-plus minute version of "Confessions," before finishing their new live album with acoustic, uplifting build-up of "Run." For a complete list of dates and to find out more about Collective Soul and their recent live album, please visit rocknrollexpresstour.collectivesoul.com.
Posted by JP's Music Blog