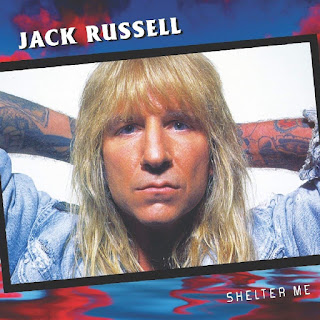 Singer Jack Russell may be best known for the role he played into the development of the band, Great White. Russell's iconic vocals help put Great White on the rock and roll map in the eighties with hits like "Rock Me" and "One Bitten, Twice Shy." After a string of successful albums, Great White hit a stumbling block in the mid-nineties with the rise of grunge music. This was the perfect opportunity for Russell to release his debut solo album, "Shelter Me" and after years of it being out-of-print, DeadLine Music is reissuing the album on CD.

The album centered around Jack Russell's iconic vocals as the band, made up of Matthews Johnson, Michael Lardie, Tim Bogert and Myron Grombacher, sounded like an edgier version of Great White. The album kept the spirit of Russell's music alive as he performed covers of The Beatles' "Hey Bulldog" and Great White's "Save Your Love." You can hear the passion and excitement in his singing on songs like "Shelter Me" and "Long Way To Go." The ballads "Leave Me Lonely" and "Roll With The Tide" still burn with classic rock emotion, before the album closes with the stellar vocal delivery of "When I Look Into Your Eyes." To find out more about the newly reissued Jack Russell solo album, "Shelter Me," please visit cleorecs.com.
Posted by JP's Music Blog