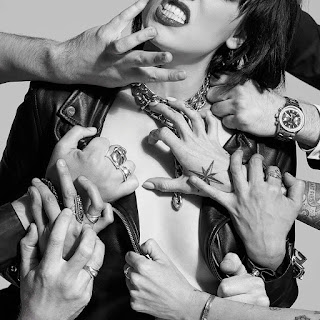 Female-fronted rockers, Halestorm return July 27th with their brand new studio album, "Vicious." It is only the band's 4th studio album, but each release continues the band's growth in popularity. The new 12-song release begins with screams of "Black Vultures" as the music hits you like a punch in the face. Lzzy Hale's vocals are as strong as ever as the band support her every musical move. The album continues with the pounding rhythm of "Skulls" and the high-energy, punk-like delivery of the album's lead single "Uncomfortable." Halestorm deal with the sexual prowess of "Do Not Disturb," before taking their foot off the gas for the acoustic-based rocker "Conflicted." They deliver the hard rock anthem "Killing Ourselves To Live," before finishing up their new album with hard-hitting metal groove of "Painkiller" and the flip-side emotional tale of "The Silence."

The band are currently in the midst of their U.S. summer tour which runs to the end of August, before heading overseas for another two-month trek. For a complete list of shows and to find out more about their new album "Vicious," please visit halestormrocks.com.
Posted by JP's Music Blog