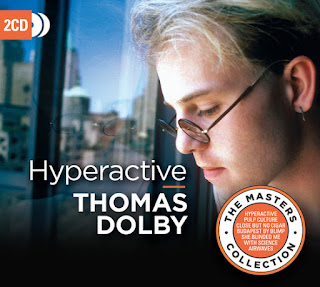 Arriving July 27th, is the first complete career compilation from artist Thomas Dolby. He released his first solo album in 1982 ("The Golden Age Of Wireless") and became on instant music star with his radio hit "She Blinded Me With Science." After a few more albums, Dolby took a nearly 20 year break from the music industry to concentrate on his other endeavors.  He would return to music in 2011 with a brand new studio album "A Map Of The Floating City," which found him bringing his love for music and his love for technology together, creating an interactive game to go along with the album.

Each disc of this new 2CD set begins with one of his most popular singles. Disc one begins with the title song, "Hyperactive," which cracked the top 20 singles chart in the U.K. and disc two begins with "She Blinded Me With Science," which was a top 5 hit for Dolby in the U.S.  The set is comprised of 28 songs in total, giving an excellent overview of Thomas Dolby's 30 year musical career. It showcases some of Dolby's lesser known songs as his music touched upon many different genres while still keeping his iconic sound.

Thomas Dolby is currently a professor as John Hopkins University, teaching music and this Fall he will start up a new undergraduate degree course at the Peabody Institute. Dolby is currently taking the summer off from studies for a short 10-date tour of his new show titled "An Evening Of Music and Storytelling With Thomas Dolby." The tour is mainly focused on the east coast, with shows in Maryland, Pennsylvania, New York, Connecticut, Massachusetts and New Jersey. For a complete list of dates and to find out more about his new career retrospective, please visit thomasdolby.com.
Posted by JP's Music Blog