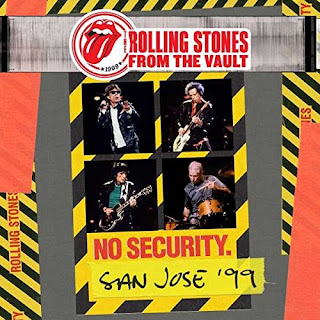 Arriving July 13th is the latest release from The Rolling Stones, "From The Vault" series. It features the band's show from San Jose in 1999, following the release of their live album "No Security" the prior year. This new live set will be released in a number of formats, including a 2CD/DVD set, a 2CD/Blu-ray set and a 3LP set as well as digitally.

It was the band's first time back to San Jose in over 30 years and the audience was ready for the band's 20-song, greatest hits setlist. I find it surprising that a show this amazing sat in the vault for almost 20 years before being released. The Rolling Stones are in top form, kicking off their show the blazing rockers "Jumpin' Jack Flash" and "You Got Me Rocking." The camera cuts to so many different angles to try and catch every action, that it have become normal now with today's filmed concerts, but was more experimental in the nineties. The stage is huge, so seeing Mick, Keith, Ronnie and Charlie up close, doing their thing is certainly a treat. It's also great that The Stones throw-in some deeper cuts too, like "I Got The Blues" and "You Got The Silver." You can certainly see them really enjoying themselves playing live in front of the huge, grateful audience.

The show sounds magnificent as the guys are at the top of their game, even when they are performing the old classics "Route 66" and "Get Off Of My Cloud" on a smaller, tighter  second stage. The set closes with Mick Jagger and the crowd having fun with each other during "It's Only Rock And Roll (But I Like It)," then Keith Richards shows off his guitar licks during "Brown Sugar," before reaching the climactic, ten-minute show closer "Sympathy For The Devil" featuring a guitar duel between Keith and Ronnie Wood. To find out more about the newly released live set "From The Vault: No Security - San Jose 1999" from The Rolling Stones, please visit rollingstones.com.
Posted by JP's Music Blog